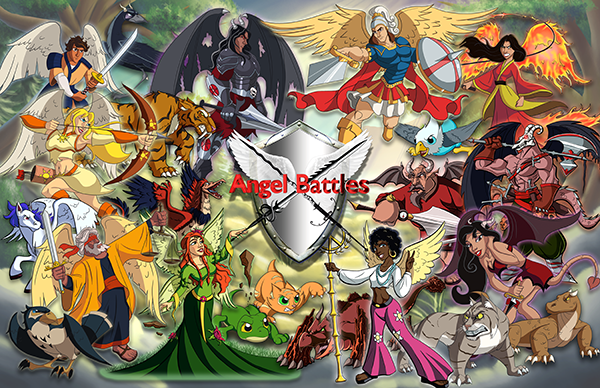 It’s time to show God just who is the best angel within heaven and worthy of reaching the top of Mt. Zion. Collect Angels, breed Pets, and fight off others to claim the top spot. It’s all about having the strongest team and being ready for any situation. However, is the trek and journey towards the top of Mt. Zion worth your ETH?

Angel Battles starts off great by throwing players a bone, where you can acquire the Angel Berakiel for free, plus four pets. Free in a sense that you won’t need to pay any ETH, but you will have to pay the associated Gas Fee, which should be affordable for all. Also, by having four Pets for free, you can engage in breeding right away, thus adding even more Pets to your team. It’s a great starting opportunity that lets you experience everything the game has to offer, without having to spend a decent amount of ETH.

As for purchasing more Angels, currently the other three Angels are at a set price for a limited time, until all 250 have been given out – as of writing, they’re still available. Unlike Angels, however, you cannot purchase new Pets. The four Pets you get for free are it, and the only way you can get new Pets is through breeding or trading with other players. However, if you’re skilled enough in a battle you can acquire the enemy Pet for free. Who’s going to complain about free stuff, am I right?

When it comes to items that cost things, Angel Battles offers cheap prices for its assets. You can expect Angels to cost around 0.05 ETH, with the cheapest being free and the most expensive currently sitting at 0.666 ETH. Although that expensive Angel is an anomaly in its pricing, with it mainly being priced that way since it is aptly called Lucifer. All other Angels revolve around the 0.05 ETH range.

As for game modes there are two: Arena Battle and Leaderboard Battle. The difference between the two is that the former matches you up enemies that are controlled by the computer, while the latter has you facing against actual players and ranking up to reach the top of Mt. Zion. Both have their own reasons to play, whether you’d rather level up or warm up first and acquire new pets, or test your skills and try to outperform other players, thus feeling better about yourself.

While playing, you can acquire achievements in the form of Medals, which can you use to show off how good you are at the game. Although, another great use for these medals is in battle. You can use these medals to give your Pets and Angels stat boosts during battles by burning them. Along with that you can trade them with other players, so if you’re seeking for a specific stat boost, but haven’t achieved the Medal yet, then you can just get it from someone else.

Overall, Angel Battles is great dApp offering with relatively cheap assets and free options for those just starting out. Its game modes encourage players to keep coming back with the Leaderboard Battles and breeding possibilities with Pets, and keeps you motivated by giving you Medals when you do something achievement worthy in the game. It’s time to show God that you’re an Angel worthy of reaching Mt. Zion’s peak, and all without burning a deep hole in your ETH wallet.