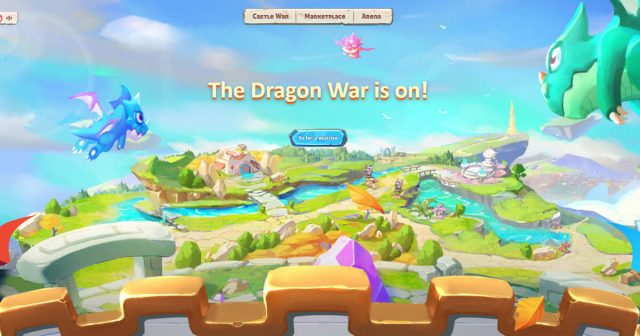 Dragons have always been a fascination for kids, and we possibly even dreamt to have them as pets or companions for our little adventures when we were young. Blockchain now offers that dream as a reality, albeit digitally. The answer to our dreams as kids is called HyperDragons.

HyperDragons is a Chinese decentralized blockchain game that uses Ethereum. It’s your standard digital collectible game with the main focus being dragons. Unlike some collectible games out there, there’s a bit more depth to it than just collecting, breeding, and siring your pets. The game offers you two main modes called Arena and Castle War.

Castle War acts as your personal hub and is where you’ll be spending most of your resources. Here, you’ll be given a castle consisting of different islands all to your own that you can upgrade, which you’ll eventually defend from other players and also use to attack them. Initially the game gives you an amount of resources for you to play with that can help you upgrade sections of your castle’s islands and thus increase those initial resources. The higher the level of your castle’s islands, the more you’ll get in return. The real meat of your castle, however, is the Mining section, named the Dragon Minera.

Once you’re set with your dragon, you can now start mining. It’ll take around 8 hours to acquire whatever amount your dragon has mined. This is a great way of acquiring in-game tokens without actually purchasing these tokens on the market. And yes, you can purchase these tokens through DDEX, a decentralized exchange market that HyperDragons uses for you to exchange your ETH for the game’s DST. Currently, unless you’re market and trading savvy, it’s not that viable an option. Once you’ve acquired DST and you’re ready, you can participate in Arena trials, hatch dragon eggs, and even upgrade certain islands within your castle.

The most you can get out of your DST is the Arena modes. Here, you draft one of your dragons to participate in matches or trials for a set fee of DST. The game does throw the player a bone with its novice trials, where you can participate and familiarize yourself with the mechanics for the low, low fee of 0 DST. As an added bonus, once you complete your first Arena trial, you’ll be given some DST to start off with. It’s not enough to participate in any other trials, but it’s a start.

A snag in the Arena mode, sadly, is that once you draft one of your dragons to participate, it can’t be used for mining in Castle Wars. It’s essentially locked in for that mode exclusively. You can retire that dragon, but there’s a fee of DST that comes along with it, so your best option is to purchase at least two dragons from the start.

In terms of what dragons there are to buy, unfortunately there isn’t much variance when it comes to aesthetics. They’re all quite similar and nothing as special as say CryptoKitties pets. They do vary in stats, but if you’re looking for something more personal and showy to add to your collection, then HyperDragons doesn’t have that much to offer. Your main goal when buying these dragons is to just serve as a means to participate in the Arena and Castle Wars modes.

After everything, HyperDragons is currently one of the more robust collectible pet games by incorporating more gameplay modes for you to do with your pet dragons. It’s still quite simple compared to other DApps out there, but if your main hook is collecting cute pets, then why not give them something more to do. It’s got a cute and fluid aesthetic that sells the experience as a whole, albeit lacking when it comes to the designs of the dragons themselves. Once you get the ball rolling, however, it’s a game you’ll keep coming back for more. The future is looking bright for HyperDragons and is something players should check out.