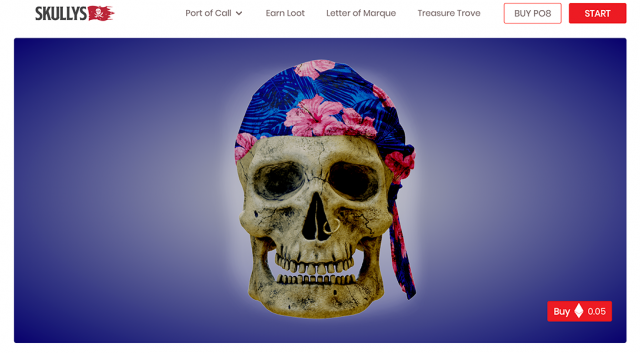 Shiver me timbers, it looks like pirates have entered the world of blockchain games and they’ve brought a lot of skulls and booty along with them. It’s all about collecting as many skulls as possible, while upgrading and ranking them up to raise their inherent value for selling or just to boast. It’s another digital collectible game, but is its pirate-centric theme enough to warrant your attention?

Currently, your main activity in Skullys is just purchasing, trading, and collecting different designed skulls. The skulls are all basically the same, with the differences being in the accessories they are wearing, such as a different color bandana. Since they’re all pretty much the same, the game lacks any incentive when it comes to collecting, at least aesthetically. Compared to other collectible games, Skullys comes off as drab and bland with its designs.

There are other attributes to consider, however, aside from the look of the skull that can add to the skulls inherent value. Skulls have different ranks , which are associated with Pirate nomenclature, such as first mate or quarter master. The higher the rank, the higher the worth of the skull. There are also boosters, which are essentially accessories for your skull.

Despite all these attributes, however, Skullys’ viability as a platform is anything but. Upon going through the market place, the only available ranks of skull are the lowest ranks, which is the cabin boy. There are a lot of them, but the result is quantity over quality and variety. As far as collecting goes, there just isn’t much to collect.

The one thing Skullys does have going for it is its affordability. Almost all the skulls can be bought for 0.05 ETH and on top of that are the bidding offers. Boosters are even more affordable, with the cheapest booster costing 0.005 ETH and the most expensive being 0.050 ETH.

Overall, Skullys isn’t much of a collectible dApp platform, especially when comparing it to others out there. It’s anemic in its variety and selection, especially since the designs of the skulls are almost all the same. It doesn’t offer much to entice players to stay or engage in its market place, either. There are possible future updates, such as the Geo-Flagging mode, where you can log into the game from different locations and mark your territory, but it isn’t live yet and there’s no sign of when it will be implemented. As of now, it’s a lukewarm platform that is best left to die out at sea.