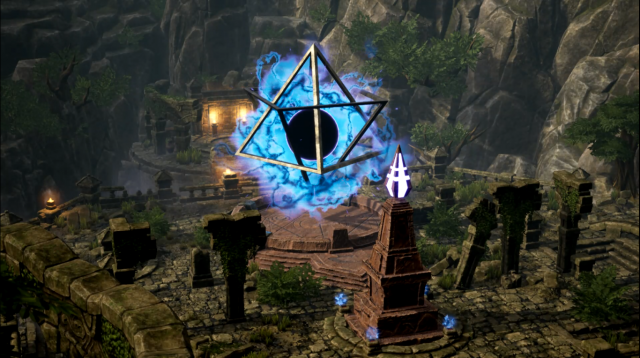 In videogames, or any form of entertainment, there is always a set and finite boundary when it comes to their worlds. In The Lord of The Rings, there are all sorts of creatures and fantastical characters, but they all fit within the rules of what is considered high fantasy. You wouldn’t see Gandalf interact with a futuristic robot, unless there was a one-time spin-off just to get a reaction out of certain fans. All genres and aesthetics stay in their respective lanes and rarely break the rules of what defines them. COBA, however, hasn’t limited itself to such a box because of the type of story it’s telling.

COBA’s  story is all about worlds colliding and the laws of space and time being broken. All these different worlds and universes are interacting with each other, when the rules say they shouldn’t. The brilliant thing about the game’s story is that it addresses this specific problem. COBA knows these worlds shouldn’t be interacting, and that’s what the conflict focuses on.

This imbalance births these objects called Hypercubes, which are objects created by the overall universal structures trying to maintain some form of balance. These Hypercubes are powerful objects imbued with the knowledge of all the universes. And, of course, when power is present, there are those that wish to conquer it.

This bring us to the colorful cast of characters that COBA has made, and is still making. We have a being that resembles Satan, an immortal, demonic samurai, and an archangel that wields twelve daggers with telekinesis. That’s just the beginning of what COBA has been showing us. With this world that they’ve created, a world where infinite universes are colliding, the possibilities are, well, infinite. Perhaps seeing Gandalf fight with a futuristic robot isn’t such an impossible thought after all.

The possibilities also translate to map design. So far the development team of COBA has shown us one map that, at first, is your standard high fantasy type of MOBA map. Further inspection shows that it  also includes elements of futuristic technology. The devs have also talked about including certain maps with cyberpunk elements, while incorporating classical industrial designs. Basically, COBA is looking to be a greatest hits album of all your favorite world designs, while being a remix and mashup at the same time.

We here at All Gamers Unite can’t wait to hear more news from what the people behind COBA have in store for all of us, and what further ways they can explore this metaverse narrative. If you want to hear more news directly from the source be sure to check out any of the COBA links below: