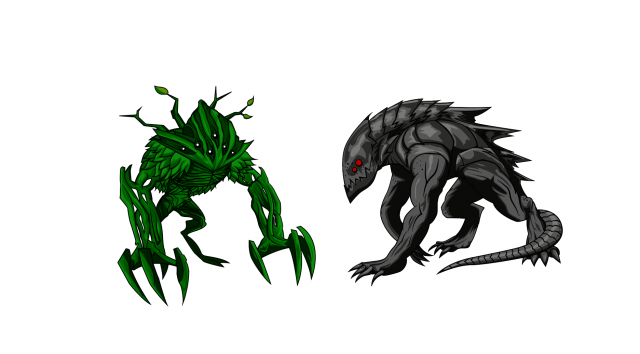 In MOBAs or MMORPGs, such as DoTA and League of Legends, there exists unique characters called minions, or sometimes creeps. They are AI controlled characters that you interact with, usually via battle, and are mainly a source for gaining XP or gaining meter for special moves. COBA isn’t any different and has the same aspects, but since the game is now known for putting a unique twist on things, the same goes for its minions.

As stated prior, minions are commonly enemy characters that you interact with to build XP, and COBA utilizes minions as such. In COBA, however, minions can also be allies on the battlefield to help even the odds and cause headaches for your opponents. These minions are distinguished by their color and flora-like aesthetic, as if to represent guardians of the planet. So far, we’ve yet to get confirmation on how many minions can be deployed in battle, but the current gameplay previews suggest that you can have at least four at a time.

Good Minions wouldn’t be without their evil counterparts, of course. These minions are your standard affair and have no affiliation, with their main function being to cause trouble and provide a means to charge up your abilities and gaining XP. These minions are a shiny, jet black color and are appear to be reptilian in nature by having long bodies and walking on all fours. They are said to be a direct result of the Metaverse and various universes colliding. Similar to a viral infection, they aren’t part of the natural order and are causing chaos for all the world’s inhabitants.

The dev team of COBA have currently been working hard on updating the minion’s animations. Previously, when the game was first releasing snippets and previews of its gameplay, the animations of the minions and heroes were a bit stilted, which is understandable. The game was still in its infant stages, but the devs have been working tirelessly to bring the game’s visuals and animations up to snuff. Below you can check out some of the various improvements on the minion’s animations and movements.

Again, we are jazzed with what COBA has been showcasing to us so far and we can’t wait to see what further updates improvements we’ll be seeing from the game. In the near future, we still have a gameplay showcase of Maica Mansor to see and more in-game mechanics and modes to witness. For more on COBA and its development team be sure to check out the links below: