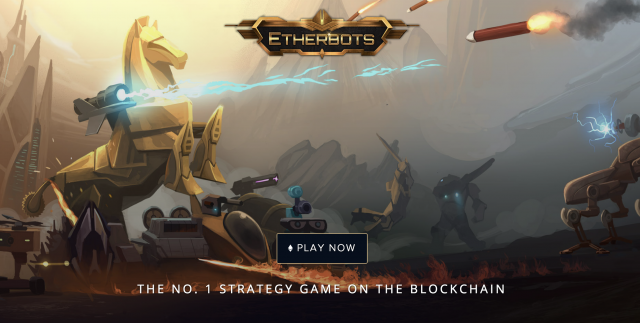 The digital-collectible dApps just keep on coming and this week isn’t any different. This time we have another contender known as ETHERBOTS, which adds a flair of PvP  and a robot centered premise alongside its collect-‘em-all hook. Will ETHERBOTS become the new king of digital-collectibles, or does it fall under the price gouging dApps space?

ETHERBOTS is set in a world where there are robot wars. People profit from these wars and by collecting all types of robot parts. There are four types of parts to collect: Bodies, Melee Arms, Defense Arms, and Turrets. Each part also has a specific element tied to it, either being steel, electric, fire, or water. The different parts and sub-categories offered from the elements add a plethora of combination possibilities when forming your robot. The fun doesn’t stop from just exploring the different combination permutations, however, since in battle each body part counters another.

In battle, each attack follows a rock paper scissors sort of flow. Melee Arms counter Bodies, Defense Arms counter Turrets, so on and so forth. Battles aren’t turn-based or active, however, instead you pick a set of five attacks and then the sequence automatically plays out. There is one catch, unfortunately. Each battle costs a certain amount of gas fee, and the speed of the transaction depends on how much gas you’re willing to spend. Thus, the cracks of ETHERBOTS start to show, and what huge cracks they are.

Although gas fees are a fairly cheap requirement to perform a transaction on the Ethereum blockchain, requiring each battle to use a transaction on the blockchain is just blatant disregard for the consumer’s ETH funds. It’s a given to spend some ETH when playing dApps, but usually it’s for purchasing NFTs or in-game consumable items. The simple act of playing, however, shouldn’t come with a cost and is an unfair monetary barrier for players.

Another knock against, ETHERBOTS is its outrageously priced NFTs. They have certain robot parts going for 500 ETH, with some even going for 700 ETH. Discretion is down to the player when it comes to purchasing these NFTs, but to even have such ridiculously priced items in the marketplace sets a predatory atmosphere for consumers.

What ETHERBOTS does have going for it is its aesthetic and charming characters. Colors are bright, while incorporating metallic tones, such as any robot-inspired media. As for characters, their dialogue is quirky and campy, as if trying to replicate those cheap robot movies from the 90s. All this quirk and charm, however,  does little to cover up the other negative spots.

Overall, ETHERBOTS unfortunately falls under the price-gouging bin of dApps, but to an even lower extent. Players shouldn’t have to pay for the mere act of playing, especially if these actions are passive in nature. This, along with certain NFTs having absurd prices, makes ETHERBOTS a dApp players should avoid, even if certain gameplay aspects are interesting.