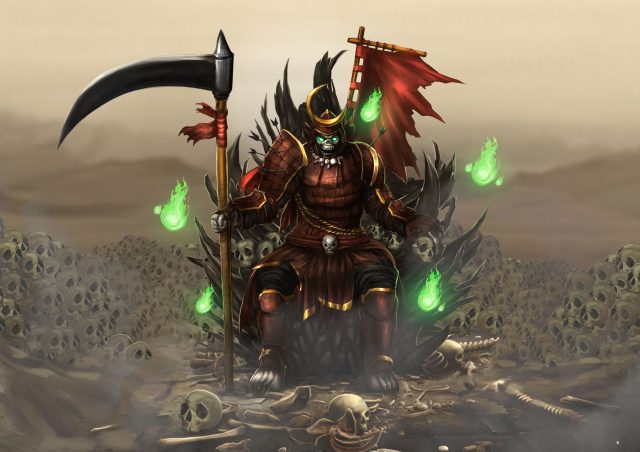 Daitogama Shogun is one of COBA’s most interesting heroes among the currently available roster. He sports a design embodying an entity of pure death, with his skeletal features, while his samurai-inspired armor adds a flair of power and combat prowess.

A warrior isn’t without his/her skills, however, and luckily the COBA team has given us a small preview into what this enigma of death is actually capable of doing. We pray for the poor souls that have to deal with such abilities of carnage.

Daitogama Shogun’s first skill is named Phantom Shuriken. With this move, he throws an array of shurikens that consist of 3 rounds. This attack will cause physical damage to opponents and will jump back slightly upon execution of the move. Phantom Shuriken is looking to be a great defensive option for spacing, while also working towards whittling down the health of multiple enemies.

Meanwhile, his second skill is called Attack Wave. Daitogama will slash through the air using his scythe, which unleashes a damaging wave occupying a wide area in front of him. Again this is another move for spacing, but is more of an offensive option. So far Daitogama is looking to be a hero that aims to take control of the battle and force players to play by his rules.

Next up we have a passive skill for Daitogama Shogun’s attacks. Named Wraith Aura, with this skill each of his attacks cause Daitogama to heal himself. The amount of health regained is equal to a certain percentage of the enemy’s max health. At the same time, there’s a chance for landing critical attacks for more damage.

Lastly, we have Resurrection. What would a warrior that imbues death be without an ability to come back from the dead? This skill is self-explanatory, but it does come with a little twist that will certainly cause a lot of headache for anyone who does try to kill Daitogama Shogun. Upon death, enemy units within a wide radius will be stunned for a short amount of time. Just when you think you’ve got Daitogama Shogun, instead he gets you.

That’s all the information we have so far on Daitogama Shogun’s skills in the game. He is shaping up to be a warrior that will cause a lot of problems for anyone playing against him, while being a force of power for those who choose to wield him.

Stay tuned for future updates regarding skills from the rest of COBA’s roster, and for further information on the game be sure to visit any of the following links:

Video games may be good for mental health during pandemic