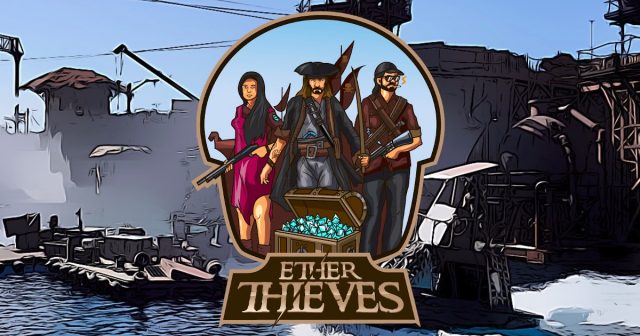 DApps that allow players to earn from actual gameplay are few and far between, with one of the notable examples being an upcoming dApp called COBA.

Players invest a lot of crypto to play dApps and these games tend to ask a hefty price before you can even begin playing. Ether Thieves bucks that trend by setting a low price wall, while also giving back to skilled players. Allowing players to earn some of the crypto they spent is good and all, but is the game itself good enough to keep them coming back?

Ether Thieves centers around a pirate theme, where the goal is to take out as many enemy-player ships as possible. In order to get things started, you’ll need to purchase a ship, which will cost you 0.007251 ETH and that includes the gas fee. It’s a low barrier to entry compared to everything else out there, however Ether Thieves also provides a free option for the skeptical and weary.

If you opt to not spend your ETH, you can use a fishing boat which will cost you a low, low price of nothing. The downside to using a fishing boat is that it is tediously slower compared to an actual ship. Beggars can’t be choosers, I suppose. Fishing boat users can still experience everything the game has to offer, despite the handicap.

From here the game is incredibly simple and straightforward. Simply control your fishing boat, or ship, using the arrow keys on your keyboard and fire using the space bar. The rest is down to your skill maneuvering your chosen vessel, which can be huge hurdle despite the simplicity of the game’s controls.

Movement in Ether Thieves can be compared to walking on slippery ice and trudging through mud. Many games with the top-down shooter formula utilize similar physics, however Ether Thieves’ version comes across more as a devastating handicap than game-engine physics to work around, especially for players who opt for the free alternative. It’s as if the game uses everything it has against you to coerce you into purchasing a ship. With this approach, it would have been better to have not introduce a free option altogether. The game’s bots outclass you completely in terms of movement and attack, where most situations end with you getting completely obliterated within seconds. There are health packs scattered around to help you out, but enemies and bots are able to utilize them as well and their better movement just means they’ll get to the health pack before you.

Another aspect that seems quite predatory is that if you want to quit your game, there’s a chance you could lose the ship you’ve purchased. In order to prevent this, you’ll need to dock at a harbor before exiting the game. It’s a simple instruction to follow, but Ether Thieves doesn’t inform the player outright that such an action is required. Instead, it’s stated in an FAQ and it’s written in a way that blames the player for not knowing. Although ships are relatively cheap, it’s still unfair to punish the player for not knowing something that isn’t outright instructed once the game starts.

As for earning, you can do so by eliminating fellow Ether Thieves players who own a ship. It’s a fairly unique concept that adds tension and stakes when fighting against human players. The drawback, however, is that no one has actually earned anything and that’s evident by viewing the game’s leaderboard. The only reward players can flaunt are the points earned by taking out enemy bots, which are valueless aside from bragging rights. This is a consequence of the game currently being in beta and the gameplay having poor maneuverability. It’s a poor showcase of the game’s main hook, but a good showcase of how predatory Ether Thieves can be on its consumers. Quite a fitting name, indeed.

Overall, Ether Thieves has a unique concept that, in theory, is beneficial for fans of dApps. It has a cheap entry price and simple gameplay that players of any skill level can pick up and play. Unfortunately it’s execution is instead predatory and doesn’t offer any of the benefits it touts to entice potential players. If you’re looking to earn for once while playing a dApp, it is best to look to other games that actually value your Ethereum investments.