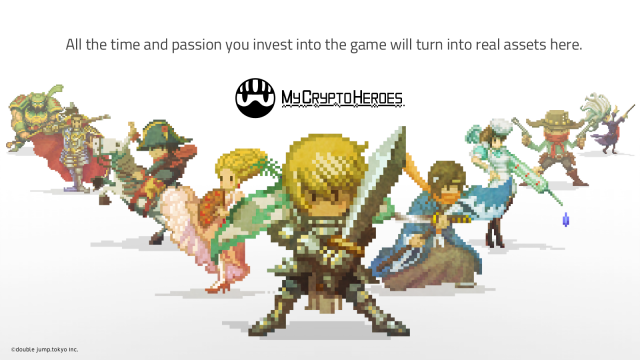 Turn-based RPGs have been a staple in gaming since the days of Dragon Quest and Final Fantasy in the late 80s, which have evolved from 2D sprite-based games to huge, living, breathing open-worlds. However, a fairly new kid on the block of gaming are blockchain games, and right now they’re taking their first baby steps into the RPG genre, with one of the most popular blockchain games out there, My Crypto Heroes.

Now, although there is a gameplay hook, it isn’t much. The strategy mainly revolves around who has the better stats and seeing how things play out in each round. One little catch is you can’t play as many times as you want, since each member of your team has a stamina gauge and each quest requires stamina to initiate. Once one member’s stamina gauge has completely depleted, you can either wait every five minutes for one point to recharge, or pay a certain fee to have ten stamina points refilled instantly. So, if you’re strapped for cash, then this is the type of game you’ll be putting down quite frequently, especially if you’re starting off with the base non-hero characters, which don’t have great stats to begin with.

My Crypto Heroes does throw players a bone in the form of replicas, which are given out in a set amount of days. They’re basically as advertised, and are copies of actual heroes and gear in the game. You can’t sell or trade these replicas, but if you don’t want to put any money in the game straight away, then they’re your best bet to get some starting loot for free and leveling up your base team as quickly as possible without dropping any dough.

The replica characters are a great way to front load your team as well, since they have quite high stats right out the gate. But don’t get too attached. Since they do expire, you’ll really have to grind it out with them as much as possible before then. It’s not much of a start, but it’s something to do, even without spending any of your crypto money.

The real meat of My Crypto Heroes, however, is the collecting aspect of the game, which does require you having to spend a bit to gain a bit. There are hundreds of historical figures and items to collect, all with their own unique stats and attributes. You can either get them through random loot drops on quests, or by buying and trading them in the marketplace with other players. As your inventory grows with more powerful heroes and gear, quests become easier and you’ll be able to venture out on more difficult ones, which by nature, drop rarer loot. And just like any other blockchain game, you can engage with other people on Open Sea if you want to sell your heroes or gear for some extra ETH here and there.

After all that, if you’re tired of buying or selling heroes, and venturing out on quests, then My Crypto Heroes offers a battle mode where you can put your heroes against other players and see who comes out on top. Not only that, but there’s an even more extensive mode called Land Battle. Here, you put your heroes to the test and defend the Land which you choose at the beginning of each Land Battle season.

Each Land has their own Kings, Maestros, Lords, Knights, and Citizens. With each Land Battle season, the order and placement of each player can be shaken up depending on their skill. This then ultimately leads to the Flag Battle, where five representatives from the Land you reside in will try and capture another Land’s flag. Another great aspect of Land Battle is the sense of community it provides within the game. You’re all working towards a common goal, and if you can prove yourself and reach Knight status, then you get a share of the Land’s profit that everyone has been working for since the start of the season.

When you’re done defending your land and capturing another, there are a few snags in the presentation department that you’ll start to notice, which are mainly with its interface and user experience. The game lacks any sense of flow and breadcrumbs when it comes to its menus and presentation. Simple things, such as displaying individual team members’ level and stats on a quest departure menu are sorely lacking. It disrupts your momentum when you want to begin a quest, but are unsure of the current stats of your party. The same goes for switching out team members, which instead of incorporating the function with the quest menu, the game takes you to a different page entirely without a direct button returning back to the quest menu. It’s the simple quality-of-life steps such as these that hold the user experience back slightly.

What My Crypto Heroes lacks in menus and user experience, it makes up for with its charming 16-bit pixel art, which harkens back to the good ol’ Super Nintendo days. Same goes for the music choice, albeit severely limited, with only one battle track and nothing else, but at least it remains consistent with the theme of 16-bit RPGs of the 90s.

Overall, My Crypto Heroes falls in the better category of blockchain games. It offers a lot more than others out there and it’s a great start for an industry just dipping its toes in the gaming sphere. Although the entry barrier can be a bit steep, despite its freebies for those not willing to spend, once the ball gets rolling, it’s a game that can get its hooks in quite deep, with its sense of community and things to collect.