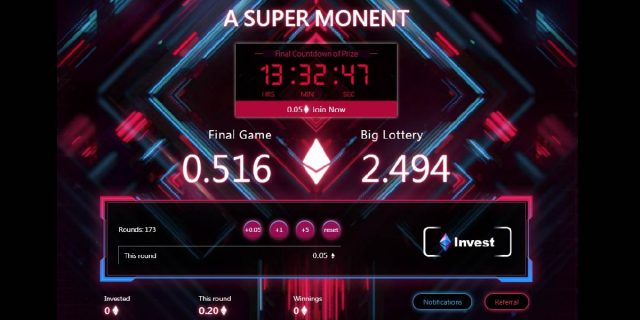 The lottery is perhaps the most popular game, if you can even call it that, which people participate in. It’s a game of chance, where the chances of you actually winning are basically slim to none. You’re more likely to become a movie star and win an academy award than win the lottery. Yet, despite the improbability of winning, it’s still popular, which is mainly due to how cheap it is to get a ticket and start playing.

The game of lottery now hits the blockchain with Super6. However, the chances of winning are a lot higher, but those better odds do come at a price.

Super6 takes six people to initiate a game, where each player is required to put at least 0.2ETH into the prize pool. Once everyone has invested their ETH the counter starts ticking down. As the timer depletes you can either decide to wait or add more to the pool. Every new investment, while the counter is running, adds 66 seconds to the clock. Once the clock hits zero the Final Prize amount is revealed and one random player of the six gets the biggest chunk from it, with it being potentially 300% of your invested ETH. From the remaining five, another is randomly chosen to get the lesser chunk from the Final Prize, where it’s calculated to be 150% of your invested ETH. The remaining four are entitled to the Final Lottery prize, where 60% is given to first place among the four and the rest get 6%.

If everything is confusing and doesn’t make sense, well that’s because it is and Super6 doesn’t do a good job of explaining exactly what pool is what and what are the exact divisions of the pools. Super6 uses terms, such as Final Lottery and Final Prize, but in the actual game and counter display they use different terms instead. To further add confusion, they describe the division of their prizes as Triple Prize and 1.5 prize for the Final Prize winners. These different terms in the game mechanics section promote confusion, especially when those terms don’t exist when looking at the game’s counter. And confusion is what you absolutely don’t want when you are potentially giving away at least 0.2ETH.

To add a bit more sting to this confusion, there are hardly any participants. The game has seen zero players and transactions in the past seven days, according to dapp.com. So as of now, getting six players seems a lot less likely than winning the real-world lottery.

Overall, Super6 is a dApp that could have had a lot of potential, especially with its idea of everybody can be a winner, if not for its poorly explained, and potentially misleading, mechanics. So if Super6 can’t do anything to attract more players, then it’s best to look and invest your ETH elsewhere. We wouldn’t want you to spend 0.2 ETH only to find yourself alone not actually part of a lottery.