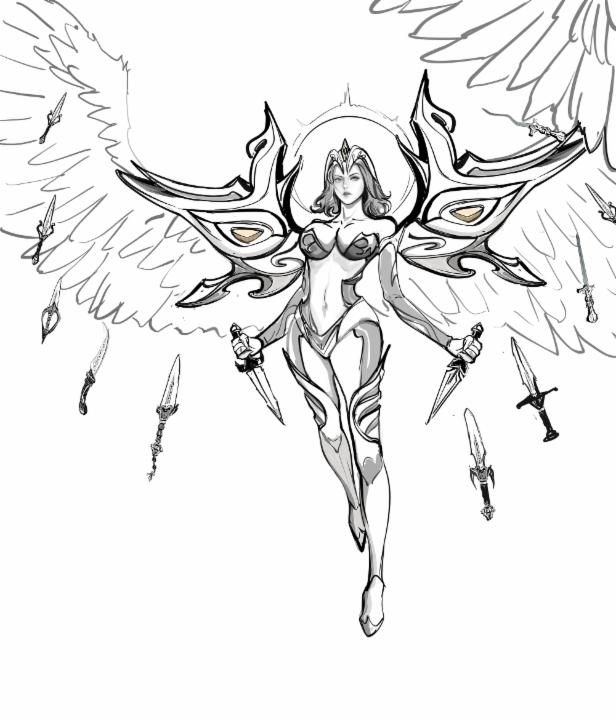 The dev team of COBA are hard at work constantly giving us the juicy updates and details we’re all awaiting about the game. In its current state, COBA is already shaping up to be a game changer for both MOBAs and dApps, and is something all gamers should be excited for when it finally releases its beta sometime this year.

For now, we currently know of only two heroes – Inoseth and Daitogama Shogun – who are interesting and offer a unique flavor not seen among the competition. The hype train isn’t stopping, however, as the devs have details regarding another interesting character. As of now, we know not if she is villain or ally, but what we do know is that she poses a threat to all who stand before her. Her name is Maica Mansor and she is a force to be reckoned with.

From what is shown in the character’s concept art, we know that she is an archangel that sports twelve daggers, with ten being held by telekinesis and two by hand. According to her lore, each of the daggers or blades she wields were once owned by another world’s champion. These blades represent her triumphant battles against them, as if trophies from each prey and world she has conquered.

The dev team from COBA have stated that she is a fallen archangel, who is on a journey for redemption. This alludes to a dark past we hope to find out about more once the game officially releases. Currently we only know that Maica Mansor wishes to reunite with her angelic companions and because of this she is experiencing a deep conflict. Her path is to seek redemption and reconciliation, but her journey has only left destruction behind her. It’s an interesting character struggle that we are definitely excited to see. Most importantly, of course, we just can’t wait to experience and get a hands-on impression once she’s ready.

Along with Maica Mansor, the team has also been working on improving the game’s map. From in-game screenshots, we can gather that the aesthetic is influenced heavily from both high fantasy and futuristic designs. It seems the team is conveying the clashing of different worlds and universes with the map’s art direction. It’s an interesting blend of styles that is unique to COBA, as other MOBAs stick to only either a futuristic or a high fantasy design.

In the coming weeks and months, we can’t wait for other tidbits the team has in store for all of us. It’s great to know that, despite the ongoing pandemic known as COVID-19, there’s a dedicated team out there developing something for us to get through such trying times by being both a means for entertainment and to earn.

For more on COBA and the team, visit the following links:

What are dApps and where do I find them?