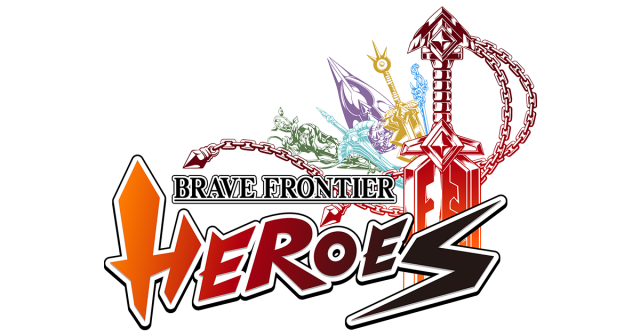 The people behind My Crypto Hero are back with a bigger and better RPG: Brave Frontier Heroes. This time the game boasts all new visuals, game-mechanics, and content to unlock. But are the new visuals and mechanics enough for you to forget your legendary warriors in My Crypto Hero?

Brave Frontier Heroes builds upon the foundations of My Crypto Hero, but goes all in on the fantasy JRPG trope. Gone are the legendary warriors of history, with typical dragoons and mages now taking the helm. If you’ve played any other JRPG, then you’ll feel right at home with these character-types and will have a general idea on what kind of attributes and skills they have.

Although the direction and theme has changed, the basic gameplay elements are still the same from My Crypto Hero. Battles still auto-scroll and don’t involve any real interaction from the player, with the outcome depending on your party’s attributes and levels. The only real difference is with the battle’s presentation.

Brave Frontier Heroes’ battles completely borrow from JRPGs in the 90s, in terms of presentation, with your party and the enemy party taking the right and left side of the screen, respectively. There really isn’t any point to the perspective, however, as you have no control of what your characters can do. JRPGs used this perspective so players could have a full view of its party and the enemies to make it easier on how and who to attack next. The only real benefit in Brave Frontier Heroes is the animations and seeing characters actually attack one another.

The perspective and thematic change leads to a big gripe I have with the game: its charm, which Brave Frontier Heroes lacks. Although the character sprites are more detailed and animations are more realized, by going all in with the fantasy aesthetic, Brave Frontier Heroes is just a run-of-the-mill RPG done on the blockchain, in terms of visuals and premise.

My Crypto Hero wasn’t the deepest of RPGs, but made up for it with the unique premise of legendary historical heroes and its simplistic battle sequences. It wasn’t just unique in the blockchain space, it was something that’s also rarely seen in mainstream gaming.

Brave Frontier Heroes does, however, improve its mechanics and quality-of-life additions a lot compared to My Crypto Hero. For starters, Health regenerates instantly in between quests, so gameplay is continuous and not sporadic. Along with that, the game is more generous when it comes to the stamina gauge. Quests only require a small amount of stamina and you can get one full replenish at 15:00 GMT.

If you can’t wait for the next refill, then you can avail the Prime Program, which is a monthly subscription that gives you additional perks, such as an extra refill for your stamina gauge, an increased stamina gauge, increased EXP from quests, exclusive weapons, and much more. The program costs 0.035 ETH per month, but can also be paid via credit card with an automatic renewal for $4.99.

Aside from the Prime Program, you can purchase the in-game currency called Zel, which is necessary if you want to buy additional party members and weapons. Zel doesn’t come cheap, and the only way you can acquire some is by purchasing it through the in-game store. The smallest denomination of Zel is 500, which costs 0.05 ETH, while the highest is 100,000 at 10 ETH.

With 600 Zel you can purchase a couple of weapons on the trading market, which are items being sold by other players. If you want to purchase an additional party member, however, you’ll have to spend the big bucks, since the cheapest on trade goes for around 2000 Zel. As for official items, there’s only a small selection to choose from and only party members are available. Official market items are also more expensive than trading market items.

Brave Frontier Heroes does seem to be unfinished and is still in its early stages. For one, Land Quests are yet to be available. In My Crypto Hero, Land Quests were done to form groups with other players and see which specific Land could gather the most resources. It was a great way to add a sense of community and rivalry amongst the player-base. There isn’t any word, as of writing, when Land Quests will become available, but hopefully it will be just as good as My Crypto Hero’s, while also adding more things to do.

Overall, Brave Frontier Heroes is a safe follow-up from the My Crypto Hero team. It has a lot of improvements over the previous game, but only in subtle, quality-of-life measures. It’s shinier, prettier, and quicker to get into, but lacks any real incentive for My Crypto Hero players to migrate over and adopt the new platform. Perhaps, as it ages, more will be added and Brave Frontier Heroes will have a concrete identity to separate itself from the team’s previous project. For now, however, the game is great for first-timers, but just more of the same for My Crypto Hero fans.