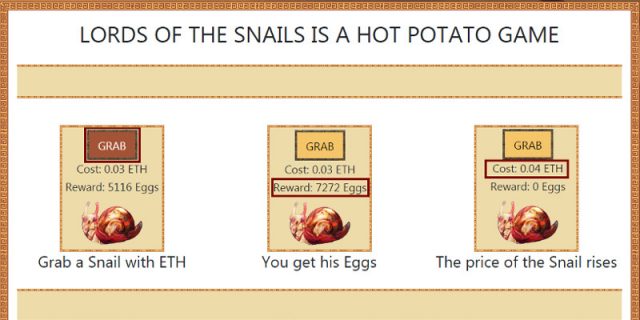 Lords of the Snails was reviewed using Osiris web 3.0 Browser

Have you ever wondered if the great lords throughout our history ever owned snails? What if you could play a game of hot-potato with the snails, get their eggs, and see who can get the most eggs? Well, with the help of blockchain, you can now.

Lords of the Snails is basically a game of chicken and quick thinking. The goal of the game is to reach a certain amount of snail eggs by grabbing a snail and then, in turn taking the snails eggs. The hook, however, is that when a snail is grabbed, its ETH price and rate of laying eggs increases. While you are in hold of the snail, anyone can grab it, granted they pay the associated ETH. So, do you wait a little longer for more eggs to be laid and risk someone else grabbing your snail and eggs, or grab the eggs right away and then wait for an opportunity to grab the snail again, which can lay more eggs. It’s this game of hot-potato that builds the foundation for Lords of the Snails.

It’s simple gambling mind games, similar to Black Jack or Poker. This simplicity extends to Lords of Snails aesthetics, as it’s all just mainly JPEGs and static images, with no flashy animations or fancy visual flairs. So if you were hoping for something pretty to look at while you gamble, then perhaps elsewhere is best.

Also, while the game is simple, its prices are quite the opposite. Snails are quite pricey, with an average cost of 0.05 ETH. That’s a lot of crypto to be throwing around, especially in a game of hot-potato, where you could be grabbing a snail multiple times. Even pricier are the Lords, while the game is in downtime. Lords are the inherent owners of the snails, so if you claim a lord, in turn, you own their snails. The same concept of hot-potato can apply with the Lords, where another person can claim and afterwards the price of the Lords increases. Now, Lords can cost 0.5 ETH, so you can’t exactly be claiming Lords left and right, unless you have a lot of ETH to burn.

Here in lies Lords of the Snails major problem, its pricing structure. Yes, you can earn ETH, but with the amount it costs to even play, you’ll be taking a big risk. Aside from this, currently there just aren’t that many people playing the game. If you do decide to play, you may have just wasted some ETH, since there’s no one around to claim or grab something from you.

Overall, Lords of the Snails has a fun concept, but fails in execution with its pricing structure and player base density. You’ll regain the ETH you spend if someone grabs the snail you just bought, but the guarantee of someone even grabbing it is quite low at the moment. Right now, Lords of the Snails is just that, a lord of snails and nothing much else.

The Simpsons and how they ‘predicted’ 2020