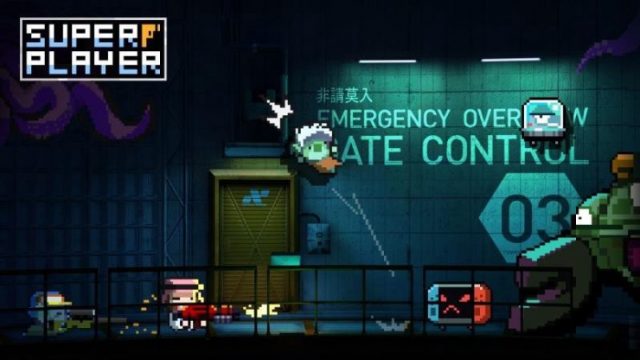 Experience fun adventures with friends filled with frantic shooting antics, great gameplay, and abundant quests to complete. One of the few blockchain games that doesn’t employ intrusive transactions in order to play the game. SuperPlayer is a dApp worth your ETH that lets you experience it for free without feeling like an incomplete product.

SuperPlayer is a dApp that doesn’t fit one genre. It fits a multiplayer dungeon crawler, an RPG, and even an arena shooter. It offers so much in a cute little 16-bit package that’ll keep you coming back for more.

At its core, however, it is a top-down shooter. For those who are familiar with games such as Contra or Enter The Gungeon, you’ll feel right at home with SuperPlayer’s controls and mechanics. On top of the shooting mechanics, it borrows similar elements from MMOs or MOBAs, where you are given abilities with cooldowns that give you an added edge when going up against enemies or other players.

In terms of things to do, SuperPlayer has enough to keep you coming back for days. There are PvE modes, dungeons to conquer, and loot to find and unlock. It does a great job of constantly giving players things to do and goals to achieve. With PvE Arenas, you can duke it out and test your skills amongst other players to become the best. As for dungeons, there are associated leaderboards, where you can see who lasted the longest in a gauntlet or who finished a dungeon the quickest.

SuperPlayer is a great game to play, but it’s also just great to look at. Its art-style fits its gamey nature, using a 16-bit aesthetic similar to classic arcade games of yesteryear. The characters animate fluidly, which gives the game that much more life and vibrancy compared to other games on the blockchain that appear more static and bland. Along with the visuals is the great soundtrack that adds the perfect ambience when exploring and ramps up whenever the action becomes more frantic.

As for the game’s market and economy, everything is optional and non-intrusive. Everything for sale is down to you whether you want to purchase it or no. Nothing is required to be bought in order to play. You can basically go and play the game forever, without having to spend any of your ETH. It’s quite refreshing to play a dApp and not be constantly hit with monetary barriers in order to get the full experience. It all comes down to purchasing optional upgrades, weapons, or gear, and even then things are affordable. The most expensive item is a gun that costs you 0.1 ETH.

Aside from the market, there are also exclusive weapons that are only acquired through a lucky draw, which is again optional and affordable to participate in costing only 0.066 ETH for one go or 0.594 ETH for ten tries. There are a lot of different items to win, so you’ll be sure to walk away with something of value.

Overall, SuperPlayer is a full, robust experience that isn’t bogged down by intrusive micro-transactions. There’s lots to do, both alone and with other players. If you’re looking for a dApp with a lot to offer and doesn’t seem hungry for your ETH, then you’re in the right place. SuperPlayer is a super dApp that respects the player and delivers on its offerings.

A Preview into the Moveset of COBA’s Daitogama Shogun